I grew up with four siblings who loved to sing. Not that anyone but our parents would want to listen to us (I’m not sure they always did either). We were noisy singers, exuberant movers and marchers to the music. Some of it blared from the record player in the living room. Much of it blared and burst from our own throats. The songs could be whatever we were learning in singing class at school or the musicals which started appearing in movie theaters back in those days (yes, I’m dating myself). If a photo of one of these singing events turned up, it might be embarrassing enough to land on the cover of Hometown Focus.

As a legacy of those days, and of all my decades of planning and singing the music of worship all week, my husband has to hear me humming songs around the house. It’s okay if you feel sorry for him. 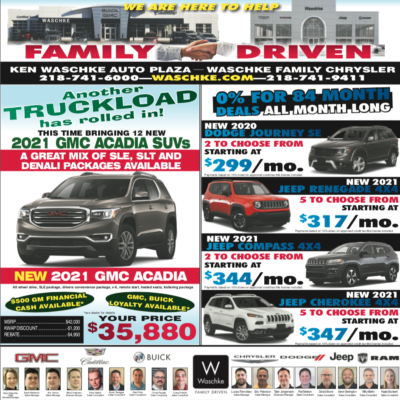 One of those stuck-in-myhead forever songs is “Home on the Range.” Not the Range that our family would someday call home, the Mesabi Range, but the open range of the Great Plains from the white settlers’ perspective. “Home, home on the range, where the deer and the antelope play; where seldom is heard a discouraging word, and the skies are not cloudy all day.” We crooned the melody with an exaggerated tremolo created by pulling the skin on our necks up and down, while we arched our heads and swayed back and forth.

Just what did we love about that song? Its exuberance matching our own? An implied invitation to mock opera singers? Or a certain yearning love for the wild places of North America? Are children already capable of being nostalgic?

What could this song possibly have to say (or sing) about our own home on the Range as we prepare to celebrate the 51st Earth Day?

Well, for one thing, the home part. There’s a reason, after all, that this community information network you are reading right now calls itself Hometown Focus. If there’s any word that describes what matters to Rangers about the Range, it would be that word home. This is where home is. Family. Roots. Childhood friends. The layers and textures of shared history. A place where nostalgia meets hard-bitten realism. A place pockmarked with mines and mine dumps, old fields turned to willows, alongside forests and swamps and lakes. A place where deer still play, even though antelope and buffalo never have.

Not only is home here on the Range. Home is grown here. As in homegrown. Perhaps, in part, because the Range is a place whose economy has been primarily extractive, where products and profits leave here for many elsewhere. Those who live here identify with what we and our neighbors grow and make here. Even as homegrown traditions seem to be fading away, of canning and berry picking, of weaving and jerky making, of gardening and canning, of pasties and potica, of sarmas and South Americans, maple syrup and wine making and honey producing, whaddaya know but they reappear!

Have you read Marlise Riffel’s marvelous Hometown Focus series “Grown on the Range?” If you’re a close reader, you may have noticed that the last three items I listed (maple syrup, wine, and honey) come from Marlise’s most recent “Grown on the Range” story about Ed Kuehl in Embarrass.

Whenever we throw ourselves into something here, even if the idea originates elsewhere, we turn it into our own home brew. Since 2009, the primary Range celebration of Earth Day has been the Iron Range Earth Fest, which began as “a celebration of local traditions and practical resources for sustainable living.” While the Range joins in celebrating Earth Day for the good of the whole community of life on earth, our celebration, the Iron Range Earth Fest, has been (and will again be next year) uniquely our own. Home grown. Grassroots. Wonderful!

Can’t you hear this hum on the Range? I do. It makes me smile sometimes, the way one smiles when one is in on a secret. This place we call the Iron Range, or “da Range,” is a truly remarkable, self-transforming place.

But this is not the whole story. The buoyancy of “Home on the Range,” so irresistible to the boisterous performance ensemble of my childhood, belies a shadow which we children could not know. Where do the buffalo roam these days, anyway? And why did they almost disappear? I think you know. The wanton massacre of buffalo and wolves, the complete extinction of passenger pigeons, while white settlers and our government systematically invaded Native nations, all took place in the 19th century, in which the song’s first version was composed. And if you do a simple Wikipedia search for the history of the song, you will find versions which glorify the environmental disaster of gold mining in the West or sentimentalize the deliberate attempt to exterminate the longest-term inhabitants of this land.

Or what about that “seldom heard discouraging word?” Over the decades here on the Range, I have heard many discouraging words. Words like “What can you do?” (the implied answer is “nothing”).

How would I have known as a child, though, that the most discouraging words may not be the ones which name difficult realities, but the ones which pretend there are none…or place us inside a bubble where those realities belong to people and places “not like us.”

I don’t need to drag you through a full list of difficult realities. Here on this 51st Earth Day, it might at least begin with the loss of almost half of all the wild animals since the first Earth Day in 1970, the sound of billions of pounds of Arctic ice crashing into the ocean; with marine and land life literally choking to death on our single-use plastic, and families within and beyond our borders desperate for dignity, for their own children’s chance at life, who keep dying. If this does not break our hearts, what will?

It is not difficult realities that discourage me. It is our failed courage to name them.

Encouraging words, on the other hand, are words that instill each other with courage, which is to say, the heart, to live out a way of love. Love for this home on the

Range. Love for this home of an earth. Love for our neighbors, here, there, everywhere.

“It’s a small world, after all,” as another nostalgic crooner sang. They’ve got that right.

Or maybe it’s not even words that give us the heart to both break and beat for life. Maybe it’s that hum of a melody which won’t stop singing itself in our musical psyche. Maybe it’s just waiting for the next opportunity to hum us into…hope.

Or, to use a phrase from the popular hymn “Here in this Place,” to give us the courage to enter the song. A List of Dog-Friendly Breweries + Wineries in North Jersey